Konnichiwa and Welcome to the 2020 RCH Olympic Games 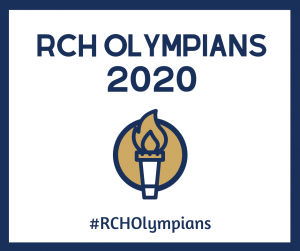 The 2020 Tokyo Olympics may have been cancelled, but RCH Care Homes have no intention of letting that stop them from showcasing the active lifestyles on offer in their care homes and the benefits of remaining active as we age.

~ ”Although we can’t promise that the Queen will parachute from a helicopter!” ~

All 10 of the Dementia, Nursing and Residential homes within RCH Care Homes will come together to participate in a series of exciting and alternative Olympic themed events between 24th July to 9th August, culminating in an alternative Closing Ceremony too. The events planned for residents and their dedicated teams of care home heroes will bring a renewed sense of fun, engagement and excitement after the impact COVID-19 has had on the country.

Paul Smith, Head of Dementia Care and Developments at RCH Care Homes, who is also a Research Fellow at Green Templeton College University of Oxford and Steering Panel Member for the Older People Forum Royal College of Nursing, reaffirmed the group’s commitment to active living and aging, and the benefits which arise from them, “It is now universally recognised that exercise (along with other factors) can play a significant part in preventing or at least significantly reducing the risk of some forms of dementia in later life. It’s also a really fun and immersive way of remaining active and engaged!

The Alzheimer’s Society recently stated that the combined results of 11 studies show that regular exercise can significantly reduce the risk of developing dementia by about 30%. Similarly, the Cochrane Review has shown promising results in using exercise to help reduce part of an expected decline as well as in keeping the other effects of ageing under control.

The substantial evidence-based benefits of physical exercise to those living with a dementia are just some of the many reasons we, at RCH Care Homes, encourage and support our residents to remain active as part of their daily lives. We believe our alternative Olympics is great way for our residents to have fun and are really excited to share all we have planned over the next 16 days! Excuse me now while I head to the gym…”

Although too much can’t be given away yet about the surprises planned, daily updates will be provided on the group’s social media platforms and you can enjoy their fun-filled events by following #RCHOlympians

Key dates to keep an eye on: